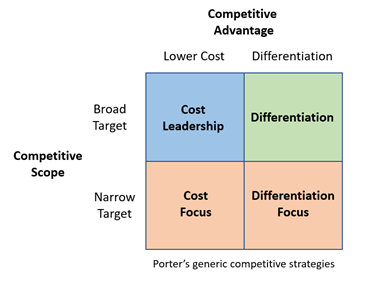 The Merriam-Webster dictionary defines a commodity as:

1. An economic good such as:

2. A good or service whose wide availability typically leads to smaller profit margins and diminishes the importance of factors other than price.

The very definition of a commodity implies that the consumer sees no discernable difference between the pig you raise and the pig your neighbor raises.

If we blend the concept of competitive strategy with the definition of a commodity, the obvious question is how does a commodity producer create and sustain a competitive advantage in their industry?

Historically, the answer has been simple. Commodity producers compete on cost leadership. For the farmer raising agricultural commodities, their competitive strategy begins with “the pursuit of economies of scale, proprietary technologies, and preferential access to raw materials” to achieve the lowest cost of production.

In recent years, consumers as well as animal and environmental activists have amplified their voices and escalated their actions demanding meat supply chains to recognize and respond to their preferences. While invasive and frustrating for meat producers, these consumer and activist preferences do in fact create opportunities for commodity producers to listen to market signals and differentiate their commodities by providing the desired product attributes. Recent examples of attributes in pork production include ractopamine free, open pen gestation, genetic influence on meat quality and more recently, Proposition 12 compliance.

With each of these attributes, the competitive advantage has been greatest for the early adopters. In many cases, early adoption of the attribute translates into additional revenue per pig. As the consumer preference for an attribute becomes more mainstream and more commodity producers change their production systems to provide the attribute, the producer’s share of the monetary value derived from the attribute declines. When adoption of the attribute becomes mandatory for producers, the monetary value disappears and the intrinsic value becomes only market access. Once this happens, the commodity has again become undifferentiated.

It is easy for commodity producers to become frustrated when consumers challenge producers’ thoughtful decisions to raise pigs both responsibly an economically and exercise their power to dictate changes to farm production systems. Likely, automotive manufactures feel the same as pork producers when their consumers (and governments) increase the demand for electric vehicles. Throughout the years, auto manufactures have scaled their production systems to achieve economies of scale and adopt technologies that make them low cost producers of petroleum powered vehicles. There is no doubt that the changing consumer preference for electric vehicles will force manufacturers to make additional investments in their productio facilities and staffing that result production inefficiencies and operational disruptions. While frustrating, the consumer has spoken and ultimately votes with their wallet. A failure to respond swiftly will put certain auto makers as a competitive disadvantage.

The challenge for pork producers is to decide whether an attribute is a trend or a fad. In other words, will the consumer’s or activist’s preference stand the test of time and justify the often substantial investment to convert our pork production systems to produce the new attribute. As preferences become mainstream, producers gain clarity on whether the signal to produce the attribute was in fact a trend and not a fad. The trick is making that informed decision before other producers while the opportunity to monetize the value still exists.

Increasingly, consumer and activist concerns for product quality, consumer health, animal welfare and climate impact are creating opportunities for production system attributes. The latest attributes for pork producers to consider include Proposition 12, antibiotic free and carbon friendly systems. Consistent with the pork attributes discussed earlier, it is up to producers to do their homework and decide whether these attributes will prove to be a trend or a fad and whether it is prudent to be an early adopter.