Skip to content
Home
/
Articles
/
Performance Impact of an Older Weaned Pig
May 26, 2022

The process of using data to make strategic production decisions is not new for PIPESTONE. It’s a process that usually starts with a concept, sometimes born of intuition, but more often born of necessity. It also requires a collaborative effort by PIPESTONE business units to bring the concept full circle. In 2016, Pipestone Applied Research set out to answer the following question: What is the performance impact of pigs weaned at an elevated age? The study was repeated in 2017 using a different boar line to account for genetic variation. Both trials told the same story:

These were promising results. An older pig grew faster and was hardier, requiring less labor and overall production inputs on the finishing floors. At the same time, subsequent total born improved in the breeding barn. The estimated total value of these benefits was $0.60 per day of wean age. This triggered conversations between PIPESTONE and its partner shareholders to look at whether implementation of the concept made sense for their farms. For some it did, and the change was executed.

However, results from a controlled research environment, although essential, should not be the end of the story. PIPESTONE’s Sow Information Bureau, Technical Services and FarmStats teams played an important role in the next step: collecting and analyzing data from commercial swine production systems. This environment is certainly more challenging to collect valid results. System design, production practices, geographical location and nutrition formulation are all variables which contribute to a more complicated equation. Could the same results be validated across multiple production systems that included many of these variables?

Validation started with the total born results of the original trials. The Pipestone Management sow database was used to study the relationship between total born, wean to service intervals and previous lactation length. The dataset confirmed the original outcome. As a general rule, for each extra day of lactation total born increased by approximately 0.10 piglet in the next parity. Confirmation of the decision to implement an elevated wean age continued with a meta-analysis of the FarmStats data collected over several years.

Here, only pigs from PIPESTONE managed sow farms were evaluated. As wean weight (and age) increased, average days on feed (ADF) improved by 7 days and ADG improved by 0.07 lb of gain/day reducing the average time in the finishing barn by almost seven days. Assuming revenue of $75.00/carcass cwt and yardage at $0.11/day, nearly $8.00/head was realized from these improvements.

It should not necessarily be assumed that all the value growth came from a bigger pig. Over time there have certainly been advances made in system design, nutrition and day-to-day health practices. However, it is difficult to deny the apparent impact of the decision to wean an older pig. 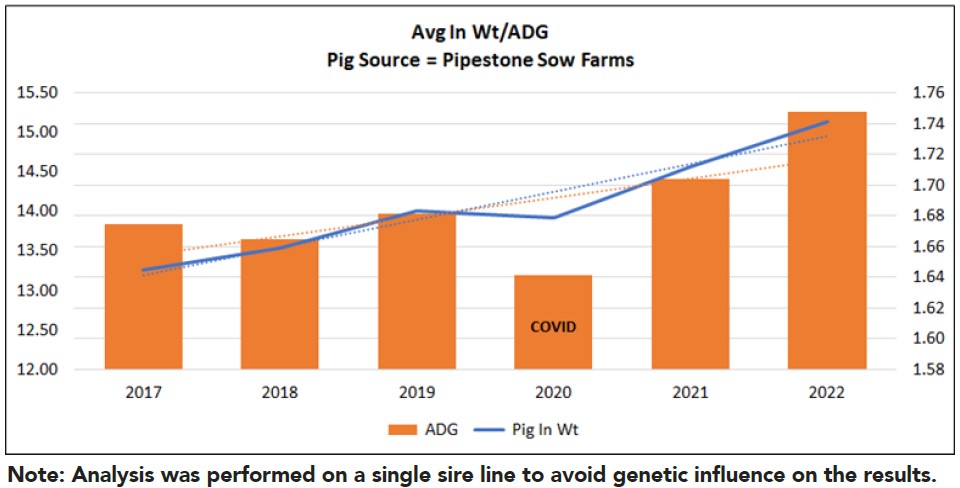