The goal for most swine producers is to make money raising hogs. With current ingredient prices, we have been getting many questions about how to reduce feed cost, which is a great question. However, many producers focus on feed cost per ton and immediately focus on the nursery diets. The most expensive feed cost per ton is always the first couple nursery diets, although the feed budget for the nursery phase only makes up about 3% of the total feed budget. Even though it is very tempting to reduce feed budgets or skip the first and second phase, I would proceed with caution for several reasons.

From our research trials and close-out data, we have validated that nursery feed formulation and feed budgets are an important area to reduce nursery mortality and fall behinds. The first couple weeks post weaning will affect the overall performance of that group. When cheaper feed formulations are used, we can document a higher fall out rate in those groups. Wean pigs do not respond well with a quick transition from liquid sow milk to dry feed and less complex ingredient choices. As a result, more pigs will back off on feed intake, become thin and not grow well. Soon that pig will become a fall behind pig. Many fall behind pigs may not make a full value finishing pig. This can transpire into enteric issues that subsequently lead to secondary problems and soon that pig needs an antibiotic treatment. 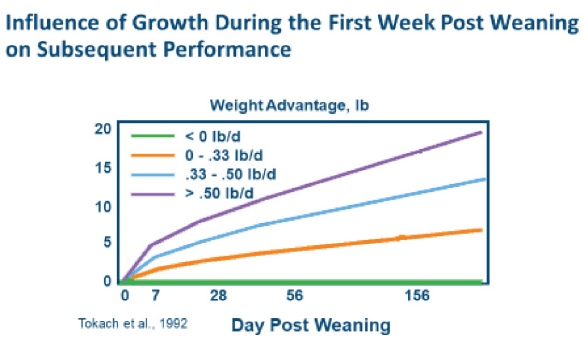 With the industry making a strong push for less antibiotics, nursery nutrition is a tool to promote healthy pigs and fewer treatments are needed. To demonstrate the importance of the first week post weaning, we have a table from Tokach et al. 1992 that demonstrates how the first 7 days post weaning can affect the lifetime performance of that pig. In the study, Tokach took pigs that grew well in the first 7 days post weaning and compared their weight to pigs in the same group that did not start well the first 7 days. As you can see, when pigs start well, by having good ADG, they will grow well the entire turn and weigh more compared to the groups of pigs that had poor ADG that first week on feed.

Below is a research trial conducted at a Pipestone Research barn which evaluated different nursery diet formulation options to reduce cost. Treatment A is the current Pipestone Nutrition formulation. Not only was it the fastest ADG, but it also had the lowest number of removals. When we do our research, we look at growth performance, economics and mortality. One way to reduce feed cost is to sell more pigs as Full Value pigs and the nursery formulation plays an important role in that area.

With the proper nursery formulation, we see less pigs that fall behind and require antibiotic treatment. 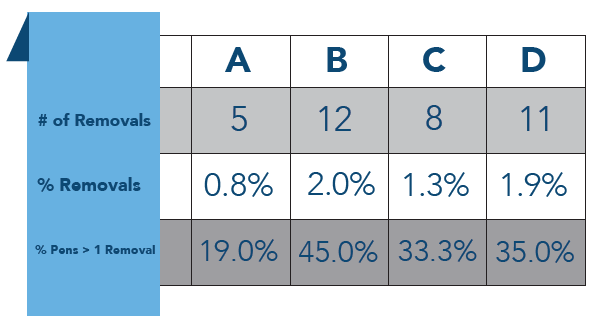 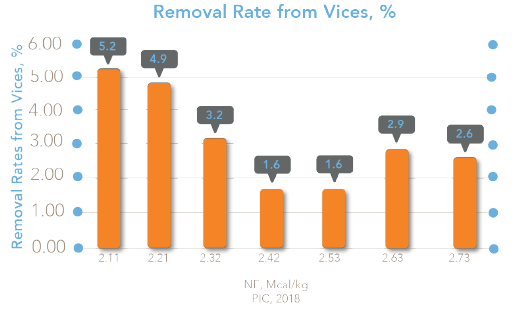 The finisher diet formulation also plays a major role with reducing the use of antibiotics by preventing vices such as tail bites, ear necrosis, flank bites, etc. When vices occur, pigs need to be treated to fully recover. A trial that was conducted in Canada looked at different energy levels and the response to vices. To the right is the table that shows the removal rate from vices by energy level of the diet. When energy got too low, the amount of removals went up. 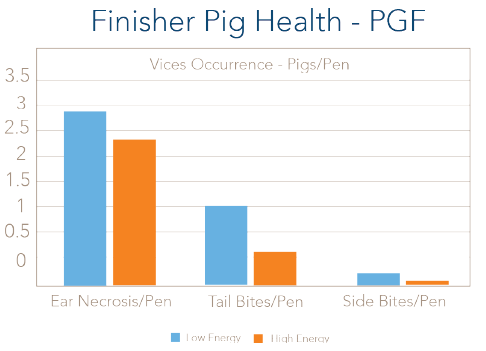 In another trial at PIPESTONE, we saw similar results when we evaluated energy levels. When pigs were fed low energy diets, we reported an increase in vices, and therefore increased treatment was needed. 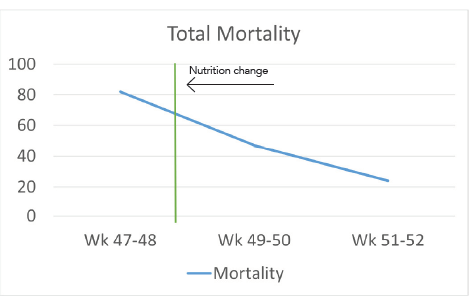 A case study from a producer in North West Iowa dealing with vices showed that when they switched to Pipestone Nutrition formulation with improved levels of energy and amino acids, we were able to slow down the tail bites and decrease mortality. 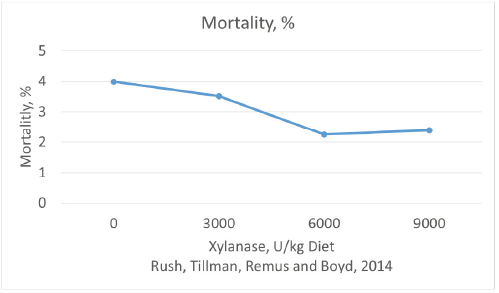 To reduce the use of antibiotics there are several items to think about on the nutrition side: