Why is it important in wean-to-market barns?

What is the true definition of biosecurity? Every veterinarian and farmer will most likely have a different definition. A simple way to look at biosecurity: procedures and protocols that are in place to protect our pigs from disease. Less disease equals healthier pigs, reduces waste of resources, and creates a more sustainable pork product. It has been proven with many research trials that good, well executed biosecurity practices can decrease risk of disease to swine herds. That is why protocols like filters, feed mitigates, downtime, showering in and out of sites, and all-in all-out practices are in place in the swine industry. Less disease results in better economic gain, thus biosecurity is a no brainer.

Fourty-two producers were surveyed in the summer of 2022 to better understand their perspectives on wean-to-market biosecurity. When asked the question, “How much do biosecurity practices have an impact on health and return on investment?” 95% of the producers thought that biosecurity has a high impact when it comes to the sow farm. When asked the same question in relation to wean-to-market biosecurity, only 48% thought it was of high impact. Why is there such a difference in ranking of impact?

The survey participants were asked to rank key areas of biosecurity in order of low risk to high risk. In the graph below, the largest ranked high-risk areas were livestock trucks, aerosol and rendering trucks. Remarkably, more easily controlled biosecurity measures like supplies, feed, personnel/employees and mortality removal were ranked as lower risk.

These risk areas can be reduced with simple changes to the site and daily tasks. 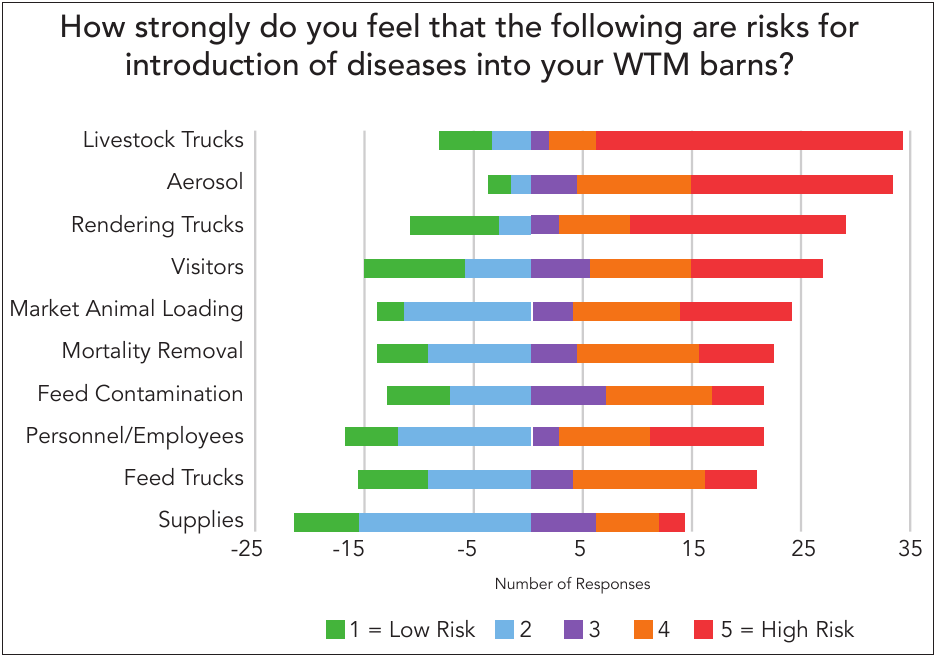 How can you improve the biosecurity of your farm? A helpful strategy to understand wean-to-market biosecurity is the 5 P’s: Pigs, People, Products, Property and Pests.